A new bill, “Act On Climate,” would commit the state to slash greenhouse gas emissions through a fast, just, and accountable transition to 100% renewable energy. Last year’s version of the bill was CARI’s #1 top legislative priority. This year’s version is even better.

Your action is needed today to help pass this bill. Use this handy web form to add your message of support for the bill. Your message will be sent automatically to two people:

Details of the Bill

Unfortunately, these goals are no longer supported by science. Steeper cuts are needed here, and everywhere, to prevent catastrophic heating of the planet by 2.7°F or more. Worse yet, the 2014 law provides no means of accountability or enforcement if the state fails to meet these goals. 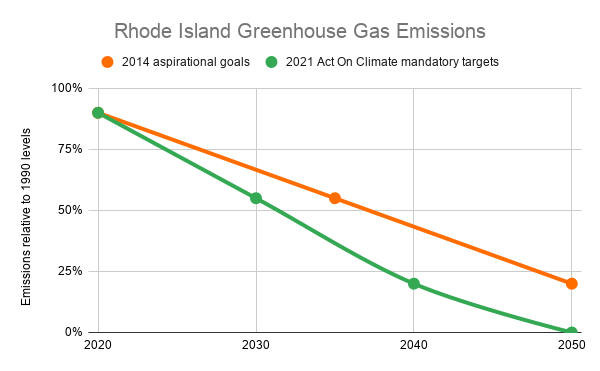 The 2021 Act On Climate bill fixes these problems with an amendment to the 2014 law. The bill requires:

Passing this bill will set a solid foundation for all future laws to address the climate crisis in Rhode Island. It will make Rhode Island a national leader in matching our policy to science. And it will strengthen our economy with good jobs, improved health, and locally produced power.

The bill has strong support from Assembly leaders, the environmental community, and organized labor. But the fossil-fuel lobby, big-business lobby, and science denialists will be out in force to oppose it. That’s why we need your support today.

To register your support for the bill, just visit this web page.  It should just take a couple minutes.

In addition, you may wish to sign up to give live testimony by phone during the hearing on Wednesday. Check the committee agenda linked below for instructions on how to do that.