On February 28th, 2022, the Intergovernmental Panel on Climate Change (IPCC) released its latest report on climate impacts. The report presents the most comprehensive scientific overview of the climate impacts that communities around the world are facing because of the continuous exploitation of fossil fuels. It is devastating as climate change is already being felt in every corner of the world.

But communities in Asia and the Pacific show no interest in giving up. Here are some of their actions in response to the report:

Fiji and the Philippines continue to face storms supercharged by warming seas and creeping climate impacts. But survivor communities are paying it forward by reaching out across the ocean to empower other survivors by lighting up communities across the Pacific.

Two solar charging systems were set up by the Solar Scholars’ initiative that was established after Super-typhoon Haiyan slammed the Philippines. The modular power stations are the outcome of the Solar Scholars training in Tacloban, Leyte, and Suva, Fiji held online from February 22 to 24. Two community representatives from Samar and Leyte–supported by the Institute for Climate and Sustainable Cities – trained representatives from the climate group 350.org Pacific and the Christian organization Pacific Conference of Churches. 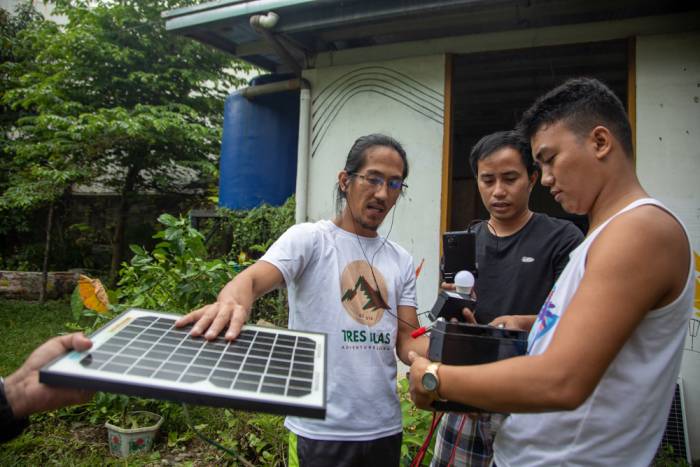 “Over the years, as we faced the same destruction in the face of intense cyclones, we’ve learned a lot and were able to equip ourselves. It has been a continuous phase of rebuilding. This training has been a light at the end of the tunnel. We can give hope to our people,” said 350 Pacific Organizer, George Nacewa, one of the new Solar Scholars in Fiji.

350 Japan hosted the IPCC special event on March 13th, inviting an IPCC scientist Dr. Seita Emori and climate impacts frontliners to talk about climate impacts and actions. This event attracted more than 500 audiences to take climate actions, such as Global Climate Action on March 25th and the Bank campaign towards Annual General Meetings in June. During the session, there is also a movie screening of People Power, a short documentary about several activists in Japan involved in the climate movement organizing.

Students Say No to Coal Funding

The World Meteorological Organization (WMO) says that the amount of weather-related disasters around the world has increased fivefold in the last 50 years. The most significant contributor to the worsening of the climate crisis is coal pollution.

Many banks and financial institutions around the world have already committed to stop funding the coal industry. Unfortunately, the state-owned banks in Indonesia are still supporting this rogue industry with people’s money. One of them is Bank Nasional Indonesia (BNI). Students and communities in 6 cities in Indonesia joined forces to urge BNI to immediately stop funding fossil energy. They also showcase art performances and exhibitions signifying the power of artivism. Several climate conversations are being held by 350 Asia together with their regional partners, including a Twitter Space that tackled how we organise and build power in the intricate path toward climate justice.

As the activists tend to work overtime, involve themselves in emotionally demanding situations, and face a lack of visible results and acknowledgment, it is not surprising that many activists get exhausted from time to time. 350 Asia initiated a Community Care Call to speak about navigating climate grief, activism burnout, and holding their movements close.

“Mental health is very important, and you won’t be able to do anything if you don’t think about that,” says Anam Rathor during the session. in Kuala Lumpur, KAMY (Klima Action Malaysia) also held a Climate Circle that discussed the recent climate impacts report and brought together activists in Malaysia to share their perspectives.

The IPCC report already suggests that the world is facing real consequences of a climate crisis that is costing lives, destroying nature, worsening food production, and hindering economic growth. On March 25th, people from all over the world, through the Fridays for Future’s Global Climate Strike Action, once again took to the streets their calls for climate justice. At least 18 countries in Asia joined this global day of action aiming to build a system where we prioritize #PeopleNotProfit. “Climate justice is social justice, that’s why we really need to amplify this situation and have this conversation,“ Chito from Youth Advocates for Climate Action Philippines (YACAP) said as the youths demand a transformative justice process in which political power will return to the people, especially the most affected communities by climate crisis for adaptation, loss, and damages.

In the same spirit, women in Bangladesh continued to lead the way in disaster response and recovery as well as the fight for climate justice. Jannatul Mouwa, founder and Executive Director of Bindu Women said, “The young women of BINDU care about how much climate change has affected our lives. From 2019 until 2022, we already did 85 climate strikes.”

BINDU Women are urging their government gender-climate justice such as sustainable embankment construction, shutting down all coal power projects under implementation and planning, and a 100% renewable energy system

We will continue to build solidarity and fight for climate justice. As the second IPCC report will be out, there will be more stories and actions from the people who believe that 100% fossil-free world is not just a dream.